The six LGBT health and community service organizations named as beneficiaries of the Grass Roots Gay Rights Foundation represent diverse causes within the community. The beneficiary organizations selected to receive new funding this year are:

Openhouse enables San Francisco Bay Area LGBT seniors to overcome the unique challenges they face as they age by providing housing, direct services and community programs. As a result, we have reduced isolation and empowered LGBT seniors to improve their overall health, well-being and economic security.

The Oakland LGBTQ Community Center Inc. is committed to supporting and enhancing the well-being of LGBTQ individuals, our families and allies.

Lavender Seniors of the East Bay

Lavender Seniors mission is to improve the quality of life of older lesbian, gay, bisexual, transgender, and queer (LGBTQ) residents of Alameda and Contra Costa counties. Lavender Seniors advances this mission through direct services, outreach, advocacy and education. A critical aspect of this work is ensuring that LGBTQ elders are well-prepared emotionally, physically, legally, and socially in their later years.

SAGE leads in addressing issues related to lesbian, gay, bisexual and transgender (LGBT) aging. In partnership with its constituents and allies, SAGE works to achieve a high quality of life for LGBT older people, supports and advocates for their rights, fosters a greater understanding of aging in all communities, and promotes positive images of LGBT life in later years.

In addition, funding is being continued for the following two organizations:

PRC (formerly Positive Resource Center) has been transforming the Bay Area for decades, helping those affected by HIV/AIDS, substance use, or mental health issues realize their best selves by providing the support and services they need to reclaim their lives.

The Mission of the St. James Infirmary is to provide free, compassionate and nonjudgmental healthcare and social services for sex workers (current or former) of all genders and sexual orientations while preventing occupational illnesses and injuries through a comprehensive continuum of services.

In addition to these six organizations, the Foundation also continued its support of Flagging In The Park by raising $18,633.32 for its 2017 beneficiaries: SF Suicide Prevention, Our Family Coalition, National AIDS Memorial Grove, GLAAD, and Planned Parenthood.

At the conclusion of this season, the Grass Roots Gay Rights Foundation targets donating its 3-millionth dollar to worthy non-profit organizations.

The Foundation today unveiled this year’s 30th year surprise of having two DJs for the first time in our history! Opening for the Main Dance Floor at REAL BAD XXX will be REAL BAD XXVII DJ, Jesus Pelayo! Following Jesus will be our Main Floor DJ, DJ Charly from Madrid! DJ Charly, a Madrid native, started his career in 2006. Whether it is Vocal House, Tech House, Techno, Progressive or Trance, he creates magical, electronic journeys in tune with what the audiences need to feel energized. His torrential, powerful beats immerse everyone in that magical journey, which is the reason he has become a well-known and respected member of the European DJ scene so quickly. His venues have included no less than internationally successful parties like Macho (We Party Group), Into the Tank, and Brut. He has also enchanted audiences spinning at We Party Festival World Pride Madrid 2017, Circuit Festival 2017, and Sleazy Madrid. Also included in his performances are Pitbull Vienna,Replay Vienna, the Banana Party Cologne, Bear Necessity and Odarko where he has been welcomed as a regular guest DJ. His versatility has also allowed him to play very specific musical genres for places like the Enfrente Club, Into The Tank and Amen Party in Madrid. Thanks to his versatile talent many kinds of audiences embrace his extraordinary sessions.

In addition, the Underground will offer an alternative dance floor with music by San Francisco’s own Byron Bonsall! Byron has been a huge supporter of REAL BAD for years, and his music is a mix of London club sound to progressive sexy tech house/techno/progressive afterhours has earned him a faithful following and led him to this philosophy, “If you don’t leave with a smile on your face and maybe a little sweaty, I haven’t done my job.” There’s nothing better than leaving a club thinking “that was fun!” Byron wants you to think that same way. “Just come in, dance your ass off for a few hours and have a good time. Leave your worries at the door. They’ll be waiting for you when you’re done. Until then, you belong to me! 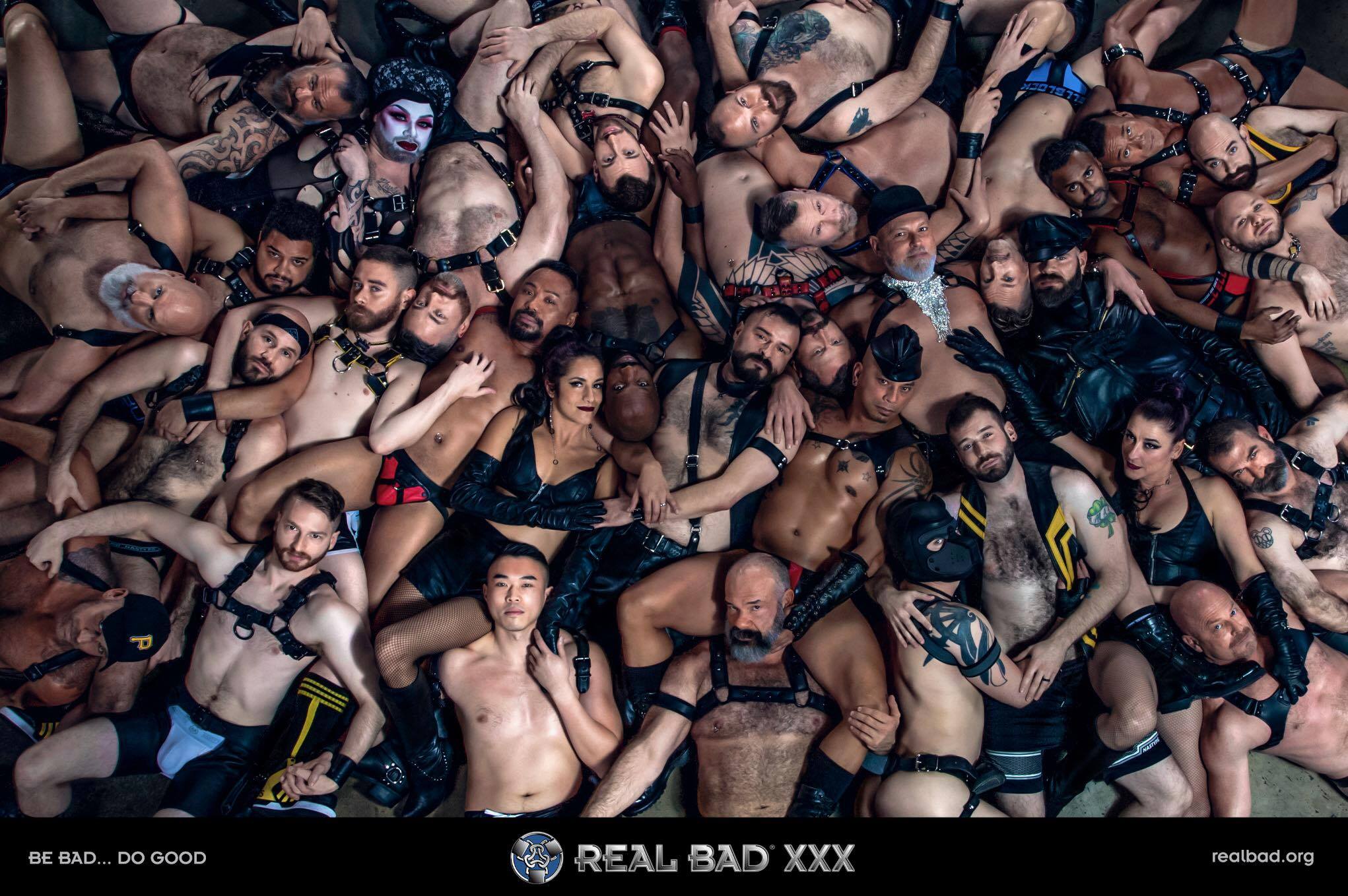 The Grass Roots Gay Rights Foundation also presents the new Up Your Alley weekend after hours party, RITUAL, with Juanma Escudero from REAL BAD XXIX (2017), from Spain. This sexy, late night dance party will be held on Saturday, July 29th, 3:30am-10am, at 1015 Folsom, the long-time home of REAL BAD. 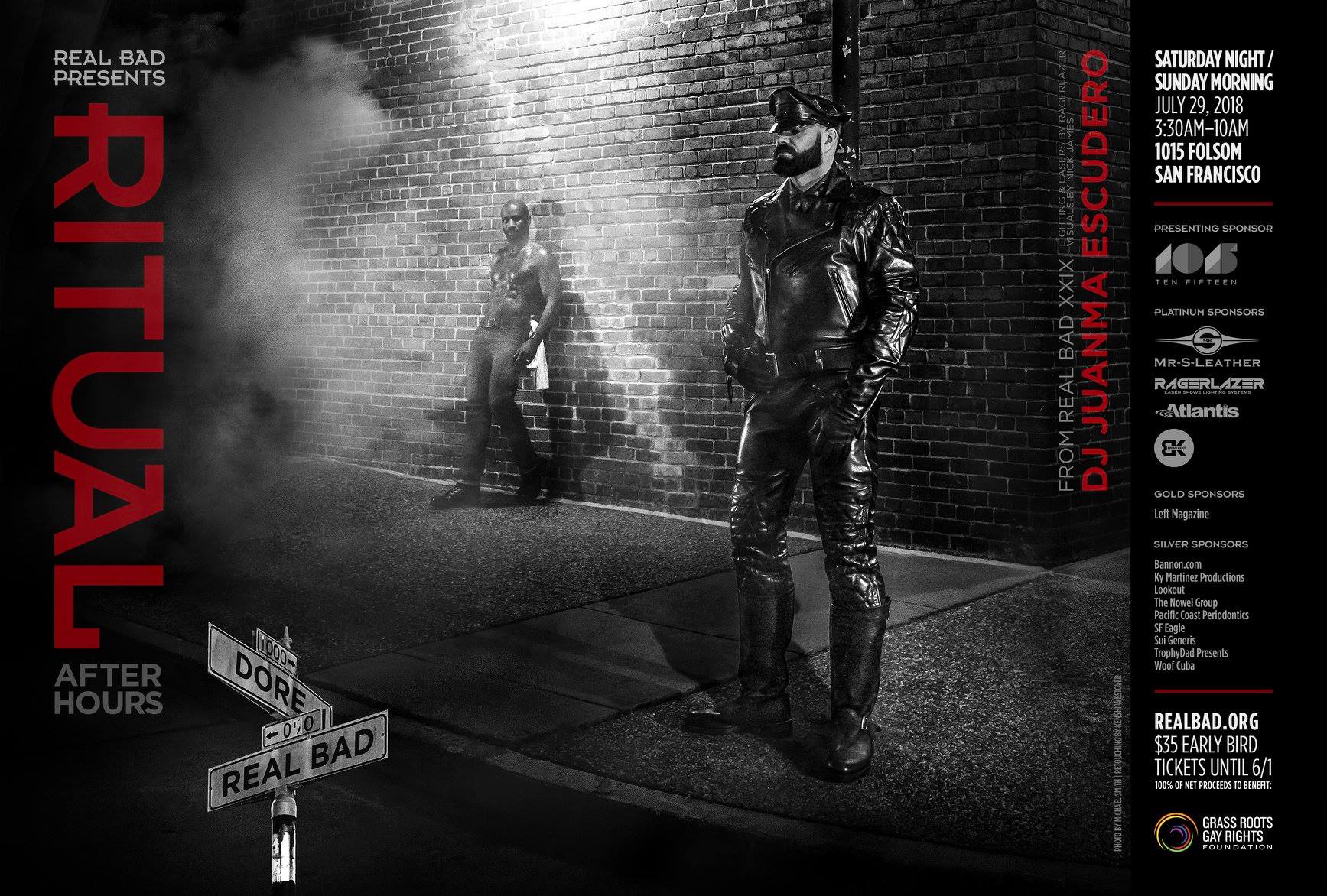 REAL BAD and RITUAL are produced by the Grass Roots Gay Rights Foundation, a 501(c)(3) nonprofit organization. These annual fundraising events are completely volunteer-produced, and are distinct in that the costs of producing the events are underwritten entirely by the party’s Hosts, a Circle of Friends who volunteer their time and resources to make REAL BAD a yearly sell-out success. This unique support enables 100% of general admission ticket proceeds from REAL BAD, and 100% of net ticket proceeds from RITUAL, to be donated to charity. In 2017, the Foundation raised $211,500 bringing the total donated to worthy non-profits to over $2.7 million over the event’s history. The Grass Roots Gay Rights Foundation changes lives by supporting organizations that promote a happy, healthy, and connected LGBT community. For more information, visit www.realbad.org and www.grassrootsgayrights.org.

Want to join the discussion?
Feel free to contribute!

This site uses Akismet to reduce spam. Learn how your comment data is processed.

Are you ready to give in to your new Ritual?